Salt Fog Test: What It is, How It Works and Why It’s Important

Corrosion is the bane of surface metals' existence. Caused by a combination of dirt, bacteria, oxygen and hydrogen, corrosion is progressive and aggressive —  once it takes hold, it can be next to impossible to stop cold. Corrosion doesn't only affect metals, though. Whether it's ceramics, polymers or even stone — corrosion is an equal opportunity offender that threatens the life cycle of your mission-critical resources. It's little wonder why the global cost of corrosion is approximately $2.5 trillion, according to NACE International.

But you can shore up the defenses of your corrosion-vulnerable products with a salt fog test — the gold standard in corrosion testing methods. If you've never heard of salt fog testing — or you're wondering if it differs from salt spray testing — this article will give you a better understanding of the overall importance of corrosion testing when it comes to assessing the mettle of your metals and other materials.

What is a salt fog test?
A salt fog test is an evaluative methodology that leverages salt water — a corrosion accelerant — to determine how quickly rust develops on the testing subject. Conducted within the confines of a salt spray chamber, salt fog testing uses pressurized air to saturate metals, coatings, stone or other materials that have the potential to rust, which produces the corrosive environment that leads to oxidation. Oxidation is the chemical process that occurs when oxygen and other substances collide with one another. In this case, those other substances are sodium and chloride, the constituent elements of salt.

Whether it's called a salt fog test or salt spray testing — the terms are used interchangeably — the goal of the test method is the same: assessing the resilience of something to corrosion.

For what other purposes is a salt fog test conducted?
Salt spray testing is as popular and as widely leveraged as it is for a variety of reasons. These benefits  include:

Affordability
Involving a salt spray chamber, pressurized air and a salt solution paired with water, the simplicity of salt spray testing makes it budget-friendly. Salt spray service providers determine their price points by what's being tested and over what test duration — from as little as 24 hours to upwards of 1,000 hours.

Quick and convenient
In real-life environments, corrosion can take awhile to manifest itself, depending again on the environment (e.g. outdoors versus indoors)  and what is being assessed (e.g. iron tends to corrode more quickly than other surface metals). Corrosion testing speeds up the process, with salt fog doing in hours what would normally be months or years.

Accurate
For corrosion to occur, the environment has to reach certain parameters, including the air temperature, the pH level of the salt spray and the air circulation level within a salt spray chamber. Salt fog services providers are able to replicate the appropriate conditions for corrosion to develop.

How is a salt fog test performed?
Just as there are many different forms of corrosion (e.g. pitting, crevice, intergranular, galvanic, et al) salt spray testing measures aren't all built the same. Thus, the manner in which they're conducted depends on the kind being done and what's being assessed.

Perhaps the most well known is ASTM B117, or neutral salt spray testing. This test method uses a 5% sodium chloride solution as the salt spray, which is typically applied to metals and certain kinds of plastics. The temperature within the test chamber is usually set to around 95 degrees Fahrenheit and the relative humidity maxes out at 100%.

There is no minimum or maximum to how long this test can be performed, but it usually runs for 72 hours.

Another classic salt spray testing methodology is ASTM G85. The ASTM G85 is a modified salt fog test, in which the acidity of the salt spray is adjusted up or down depending on the test subject and the kind of corrosion that occurs. Ranging between A1 to A5, ASTM G85 A1 leverages acetic acid for spray with a pH level of between 3.0 and 3.5. The air temperature within the test chamber is set at 95 degrees Fahrenheit. ASTM G85 A2 uses a lower pH level for the spray but a higher temperature compared to A1 (120 degrees Fahrenheit).

What protective coatings can be used to minimize corrosion?
Again, the ultimate purpose of salt fog testing is to assess how resistant something is to corrosion. Being armed with this information provides guidance into what coatings can be used to delay its formation. There are many different effective coatings that can be applied, from zinc, to epoxy to paints and chromate. Which one to pick is influenced by the material in need of protection and the environment the material will be located once in real-world use. Additionally, protecting coatings themselves — such as electroplated chromium, nickel or copper — can be assessed in a test chamber to see if they will be an effective deterrent to corrosion or if a more resilient application is required.

Whether you're seeking a salt fog test service, accelerated corrosion testing or need a salt spray chamber so you can conduct one on your own time, Auto Technology has what you need. Contact us to learn more or schedule a time in our testing lab today. 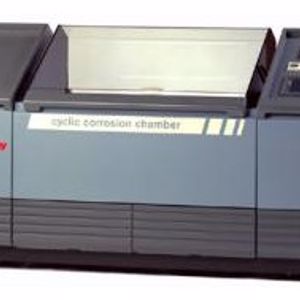