Ship Rust Prevention: How to Contain Rust When It Affects Your Ship and Containers

Delays, backups and snarls; they come with the territory in the shipping industry, especially for organizations that transport goods by water. Issues like these don’t happen all the time, but when they do, they can create a lot of vexation and frustration, both for shippers and recipients.

But an even more common problem than traffic tie-ups is rust. A product of what happens when oxygen, water and iron come into contact with one another, rust thrives in moisture-rich environments, the same environments shippers, watercraft and the armed forces navigate regularly. As retired Naval captain Scott Tait told the Los Angeles Times, ships are not only doused with salt water from splash over and the like, they’re also surrounded by salty ocean air. When the metal and steel composition of ships are not sufficiently protected with a corrosion-resistant coating, it’s only a matter of time before hulls collapse and ballast tanks give way.

“Corrosion through the entire ship is a huge, huge issue,” Tait explained.

While rust and corrosion may be a reality for the marine industry, it’s a winnable battle with the proper rust prevention measures in place.

What causes shipping containers to rust?
As mentioned, rust doesn’t derive from any one element, but a combination of them. Since shipping containers are frequently composed of steel — an alloy of iron — they can quickly begin to display some of the classic signs of rust, evidenced by its brownish-yellow hue and splotch marks. When salt is added, it’s a rust accelerant and the decomposition is much more rapid.

Aside from its unsightliness, rust causes severe degradation to metal surfaces. In the case of containers, the protection they provide to interior contents will eventually reach a point where it’s no longer effective.  The greater the exposure to salt water and air, the quicker the deterioration. How fast the resulting effects are depends on the environment and where shipping containers are placed.

As rust and corrosion expert Jonathan Waldman told the Los Angeles Times, the toll rust can have on assets knows no bounds, affecting infrastructure like bridges to vehicles like cars, planes and ships.

“What rust has done is almost limitless,” Waldman said, who authored the book “Rust: The Longest War.”

So long as air and water are around — and metal or steel is exposed to it — rust is unavoidable. It’s going to happen one way or the other. Fortunately, there are strategies you can use that can make ship rust prevention closer to a reality.

How do you ensure proper rust protection of your metals during shipping?
A core component to ongoing rust prevention and protection is the coating that’s applied to metals. As recommended by CPV Manufacturing, vinyl tar coating and coal-tar epoxy are highly effective in diminishing the rate at which metals corrode. When generously applied, coal tar epoxy and vinyl tar help slow the speed at which corrosion occurs because these coatings have a high tolerance for moisture. In addition to its use on commercial ships as well as containers, coal tar epoxy is commonly applied to pipelines, water treatment facilities and tanks, according to Corrosionpedia.com.

“The Navy applies rust-resistant paints to ships that are exposed to salt water.”

Another effective rust prevention treatment is paint. For instance, the Navy frequently applies rust-resistant paints on areas of the ship that are exposed to salt water, such as the hull and tanks, the Los Angeles Times reported. On the bottom of ship hulls, which are in constant contact with the water when outside of dry dock, the Navy uses a special epoxy-based paint. Any color suffices but the Navy opts for red because it’s easier for divers to recognize and helps them differentiate between certain portions of ships’ exteriors, such as the hull versus the keel.

Additionally, zinc —which is a galvanized steel — has rust-prevention qualities. In addition to the aforementioned measures, shippers physically attach a zinc brick to a ship’s outer body, the paper reported. In doing so, zinc serves as a sacrificial anode and contains naturally occurring properties that filter through to the ship and heighten its rust resistance. Regardless of your industry, if rust and corrosion are a problem, Auto Technology can be your solution. Contact us to learn more about our services and our environmental testing laboratory. 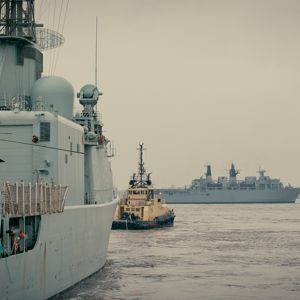