Under the hood of your car is a mishmash of engine components. Be it the dipstick, sparkplugs, radiator or battery, virtually every automobile features the same assemblage, with some variation in its location.

Another common resident is battery corrosion. The (usually) white, flaky material surrounding the battery terminals, battery corrosion occurs naturally and becomes more likely to appear the older your battery is. Generally speaking, a car battery has a lifespan of around three years, depending on how often you use your vehicle and how many miles you put on it. But if the corrosion is severe, it can shorten the longevity of the car battery.

While battery corrosion may be natural and impossible to avoid entirely, that doesn’t explain why it even occurs in the first place. Once you know the why, understanding how to fix the problem becomes easier.

What causes battery corrosion?
Much like the corrosion that affects metals, battery corrosion stems from a confluence of interactions involving moisture-rich air, temperature variation and surface material. Inside your car battery is a substance called sulfuric acid. Often used in industrial settings and laboratories, sulfuric acid is an oxidizing agent that enhances the combustion of other properties, and is ultimately what helps energize batteries.

But when batteries are cycled on and off whenever you’re driving or parking, the battery’s temperature changes, which causes it to release hydrogen gas. This gas then diffuses out of the battery through its vents and reacts with the other gases in the air. It’s this intermixing that produces the flaky substance.

Can corrosion kill a car battery?
As mentioned, the typical car battery has a lifetime of around three years, depending on a variety of factors related to use. The automobile’s make and model may also play a role. But the average can be substantially less than that when corrosion is factored into the equation. The main reason why is corrosion saps energy from the car battery. Additionally, the buildup that occurs around the terminals causes a disconnect between the copper clamps and the battery terminal units, thus stifling the electric current flow.

At the same time, though, batteries themselves may be defective, ultimately compromising an automobile’s dependability. As J.D. Power and Associates found in its 2017 Reliability Study, battery failure was one of the top 10 most common repair issues. Forty-four percent more respondents cited this issue than survey participants from the 2016 poll.

The ability to recognize and diagnose battery corrosion can prevent you from spending money unnecessarily.

How do you safely clean corrosion off of car battery terminals?
Once you recognize terminal corrosion, the next logical step is to remove it. This is fairly easy to do; all you need is some elbow grease, a wire brush and a common household cleaning agent. It’s as simple as 1, 2, 3:

1. Open the hood of your vehicle and locate the battery.

2. Scrub the terminals with the wire brush along with a solution baking soda mixed with water. You can either dip the brush into the mixture or pour a small amount of it onto the affected area. If you don’t have a wire brush, an old or unused toothbrush may also work well. The harder the bristles, the better.

3. Continue scrubbing the terminals until the flaky material is completely removed or at least is diminished enough to restore connectivity.

Much like you have a choice between brushes, you don’t necessarily need to use baking soda. As CarCareHunt.com suggests, other effective solutions include a traditional soft drink (i.e. cola, ginger ale, etc.) or mixing tartar cream with baking soda and hydrogen peroxide. You may also be able to purchase a cleaning agent at your local auto parts store.

If you go the soft drink route, it doesn’t necessarily have to be cola or ginger ale. So long as it contains carbonic acid, it should work fine. If your beverage of choice is carbonated, it almost certainly has it.

How do you prevent car battery corrosion?
The purpose of tuneups and maintenance is to head off problems before they occur, but since terminal corrosion happens naturally, you may wonder whether prevention is possible.

At the very least, you can slow its progression. CarCareHunt.com points out that there are a variety of anti-corrosive sprays that you may be able to find at your local hardware store. These contain chemicals that help to preserve the battery terminal by forming a shield of sorts.

“Grease assists with temperature regulation so the variability in extremes isn’t as significant.”

Another strategy is using vaseline or grease. Grease assists with temperature regulation so the variability in extremes isn’t as significant.

You can also stay on top of the issue by monitoring your battery. Taking a look under the hood every few weeks and removing what you find with a brush will of course cut down on the buildup.

While these strategies can help motorists maximize the longevity of their vehicles, it’s important for automakers to ensure their models are as resistant to corrosion as possible. As the J.D. Power study found, there may be a systemic problem that needs to be addressed before the make and model hits the market. Auto Technology has the environmental testing laboratory chambers, products and tools that can help you identify corrosion so you can make the appropriate corrections. Contact us today to learn more about our testing tools and other services. 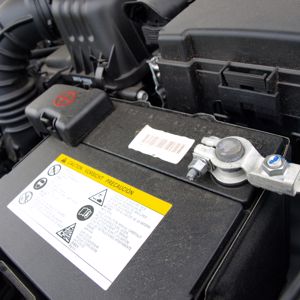